The National League are teaming up with Prostate Cancer UK this week in a gruelling “7 Marathons in 7 Business Days” challenge.

Chief Executive, Michael Tattersall, will be taking on over 180 miles of walking from today to support Kevin Webber – an Ambassador for Prostate Cancer UK- and raise awareness and funds for the charity.

The walks will be held in Newcastle, Leeds, Sheffield, Manchester (x2), Preston and Liverpool until19th June. Tomorrow’s walk in Leeds will include Alex Neary – Editor of The Non-League Paper- and Pitchero CEO Mark Fletcher.

They will be joined on each leg by representatives of partners of The National League – including Vanarama and UCFB – as well as friends from the football family.

The National League raised over £4,000 in funds for the Prostate Cancer cause at its annual Gala Awards Night on Saturday night.

Last year Weston-super-Mare A.F.C were extremely proud to be a part of a similar event, with walkers coming from Torquay United and Exeter City to have breakfast with our club officials before they made their way to Bristol Rovers and Bristol City. 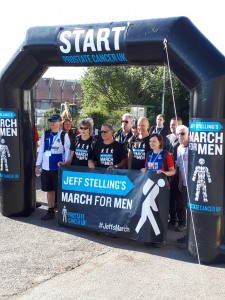 For those wishing to donate, Michael Tattersall has created a JustGiving page, which can be found here:  https://www.justgiving.com/fundraising/michael-tattersall4

The National League’s social media accounts will keep you up to date with Michael and Kevin’s progress.