Ahead of the 2019/20 season, Weston-super-Mare AFC Women have confirmed which division they’ll be playing in alongside announcing their management team.

The Women’s team have been advised to help travel within the league they will continue in the South West Regional League but will be moved to the Northern Division where they’ll face Downend Flyers, Cheltenham Town, Almondsbury FC amongst others. 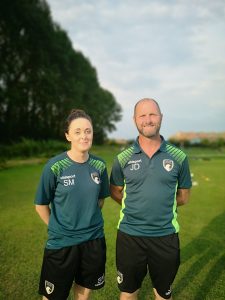 With this new challenge, The Club have now carefully selected the management and assistants to take the women’s side forward.

Stacie Morrissey will continue her role as Manager for another season alongside her many other roles for the club and team.

We now have the knowledge of the league level and know what we must do to achieve the results in the coming season.

“We have an immensely talented group of women and a passionate, knowledgeable team of coaches to work with them.

“I’m really looking forward to the new season with the team and I couldn’t be more proud of how far they have come in only three years since I set up the side.”

Chairman of Banwell FC Jimmy Darch will be assisting Stacie in a Co-Manager role.

After working with the women at the end of last season I think it will be great to work alongside Stacie and take some pressure off her.

“Hopefully, she can get back playing and continue the incredible roles she has been doing for the side.

We also secured the services of an A License coach who will join the management team in late 2019 who will take on the role of Head Coach. More information about this appointment will be released in due course.

Trueman Currie from OxHouse Gym will lead all the women’s weekly CrossFit and conditioning sessions.

Jamie Fisher will be taking on a new role within the team as Goalkeeper Coach.

Player Karen Catton has recently been injured and has decided to join the coaching team.

Becca Cox will be the team’s Sports Therapist.

The Club would like to thank Stacie and her team for all their hard work and we look forward to following their progress during the 2019/20 season.