Following months of protracted false communication and broken promises it probably comes as no surprise to all club staff and supporters alike we will not be receiving the bespoke Hummel shirt as chosen and agreed back in May.

The supply issues Hummel have experienced is well documented within this calendar year. Many would say they are the victims of their own success following a dramatic upsurge in business with the professional and semi professional clubs Hummel have attempted to service. WsM AFC have been at the forefront of these issues and despite clinging onto, what turned out to be, the false hope of receiving the shirts we have taken the decision to abandon the order. All the way through this process NK Sports has tirelessly fought to supply the new shirt to the club and it’s supporters but they have only been given the same false promises issued to the club. That said, within the Hummel supply contract, NK have completed all the 1st team, staff, youth team and junior Hummel kit supply for this current season.

Whilst this is disappointing news we must look forward to the future. To give something back to the club and it’s supporters, NK Sports intend to produce a Hummel FA Cup shirt for the game versus Wrexham on the 11th November. This shirt will be donated to the 1st team to wear during the match and then the club will auction these shirts, with the proceeds going to the British Legion. This particular model of shirt will then be used by the 1st team as part of the home kit for the rest of the season. Not only that, NK Sports will be producing a limited number of replica home shirts which will be available to all club supporters at HALF the normal retail price. This will be £12.50 for a junior shirt and £15.00 for an adult version. The details of how to buy these shirts will follow shortly. 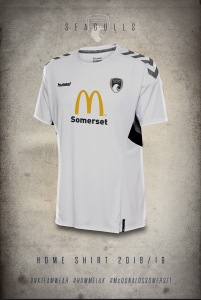 The Club and NK Sports hope this will make some headway into dampening the disappointment of the whole shirt issue and we can look forward to what promises to be a great occasion on the 11th November.