Weston-super-Mare AFC is delighted to announce midfielder Jamie Edge has committed to terms for the upcoming 2015-16 season.

The former Arsenal and West Bromwich Albion youngster joined the Seagulls midway through the last campaign, bringing balance to Ryan Northmore’s midfield, in addition to a number of competent displays in defence.

Weston manager Ryan Northmore said: “I am really pleased that Jamie has signed on for another season. He has a very professional approach to his football and improved as the season went on.

I think he will go from strength to strength this season and be integral in our success. 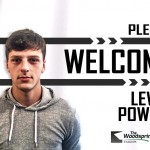