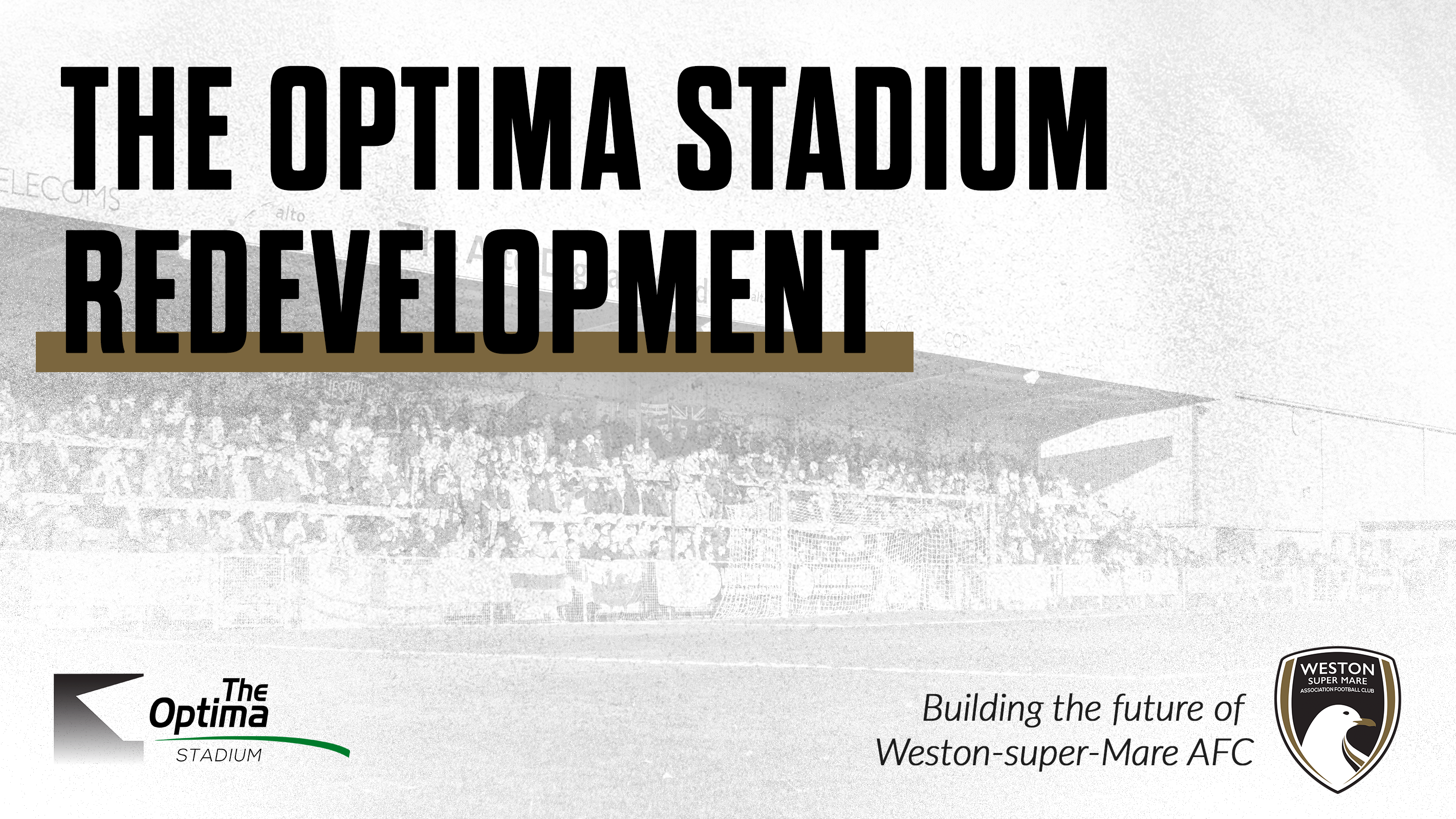 Weston-super-Mare AFC are delighted to announce exciting plans to secure its future and provide new facilities for our fans and community as part of a major redevelopment on The Optima Stadium site.

The construction of 99 apartments, located on the eastern part of the site next to Winterstoke Road, will help secure the long-term future of the club and enable improvements to the football, hospitality, and event facilities on The Optima Stadium site, benefiting the club, the fans, and the community.

The stadium will be set up to future proof our on-pitch progression, with a new stand (replacing the current Optima Stand) for 750 seats and extra terraces at stage one, with the capability of achieving 2000 seats and a ground capacity of 5000, which is the requirement to stay in League Two.

The new club facilities will include changing rooms, physio room, gym, hospitality and function rooms, and a new sports bar and restaurant which will be open 7 days a week. These new facilities along with the existing 3G all-weather pitch will make The Optima Stadium an integral community facility for healthy living, activity, and mental health support. These club facilities will be built first, so that the club is able to operate as normal, with the residential development to follow straight after. Once built the development will create additional jobs in catering, hospitality, and leisure.

Home fixtures will still be played at The Optima Stadium during all phases of construction.

The club has engaged with experienced consultants to progress the project.

Ahead of submitting a planning application to North Somerset Council by June 2021, we will be consulting with key stakeholders including our loyal supporters, neighbouring businesses, and residents.

We are notifying near neighbours and will now start our early engagement process with the following survey, which we urge all stakeholders to complete – CLICK HERE TO COMPLETE OUR EARLY ENGAGEMENT SURVEY

We will then run a further round of consultation which will start in early May.

Depending on Covid-19 guidance at the time, the consultation will be run mostly online through the club website together.

If the planning application is approved, it will secure the long-term future of the club and provide us with the platform to become the only full-time professional football club in North Somerset. It will also create a much-needed health and activity community hub, within walking distance for so many of the local residents.

We plan to release more details in the coming weeks, including more visuals of the proposed development.

The club is in a stable position, but we have been working on a development for the past 5 years to try to produce something that will enable the club to progress, whilst also offering a major support and facility for the local community.

“We are really pleased with what we are now proposing and are looking forward to making this dream a reality”.

When Weston-super-Mare AFC reformed in 1948, it was playing at the Great Ground, Locking Road. I was watching them play on this ground, the goalkeeper at the time used to take me to watch.

“The Great Ground was purchased for development and the club was forced to leave, as it was not owned by the Club.

“The Club was fortunate enough to have the owners of the Royal Pottery, who also owned the adjacent land, they renamed the site Langford Road, where they had a Nissen Hut which was the bar and skittle alley.

“This site was also then used for development and the Club were forced to move again. This move took them to Woodspring Park in 1983 where they were given a 30 year lease by the council.

“I bought the Club in 1986 and sometime later negotiated a land swap and extension to our lease to a 99-year lease.

“This lease was key for the final move to Woodspring Stadium in 2004, this move allowed the Club to split the proceeds of the sale of the land to Barratts on a 50/50 basis with the council.

“This was the first move that meant the Club owned its own site, this is now key to the final development that we are now proposing.

“This development will mean that the funds from the sale of the residential development can be reinvested into the Club facilities and achieve our aspirations of playing at the highest level possible.”