Weston-super-Mare A.F.C are delighted to announce the signing of Eli Phipps after a successful trial period at the club.

Phipps is a 21-year-old striker who has previous National League South experience, as well as experience within the North section of the pyramid. 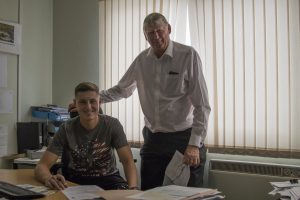 Eli started his career with Cardiff City at youth level and progressed into their U18 and U23 sides, being a regular and prolific goal scorer throughout. In September 2016, the young forward went out on loan to Gloucester City (then of the National League North section) and made three appearances in a month-long loan spell.

In January 2017, Colchester United had seen enough of Phipps to offer Cardiff money for the Welshman, and he made the move to the Weston Homes Community Stadium, signing a professional deal until the summer of 2018. The forward was a regular within Colchester U23s, even scoring on his debut in a 2 – 1 win over Southend United U23s.

After a successful time with United, Phipps was on the move again, and in September 2017 National League South side Welling United penned a one-month loan deal with the in-demand youngster. The forward has visited the Woodspring before, scoring for his loan club against Weston in October 2017 in a 0 – 2 win for the Wings after having his loan extended the previous week. In the summer of 2018, Phipps’ contract at Colchester ran out, and the forward was released by the Football League Two club.

On the signing of Phipps, Marc McGregor commented

We are pleased the club have backed us in bolstering our attack. Eli has performed well over pre-season and we are happy to have him once again. He could well have gone elsewhere for more money so it is pleasing to see he wants to improve as a player and he sees the potential here with us. Eli is a clever finisher and we now have lots of goals in our squad. We will work hard now in the final push to do the same with our defensive units

Catch Phipp’s first league home game against Truro City on Tuesday 7th August, kick off time is 19:45. We hope to see you there, and thank you for your support.