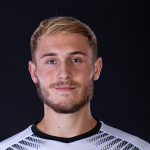 Isaac started out his career with Bristol Rovers after joining them as an under-7 and he worked his way up into the U18 squad at Rovers despite Fulham keeping a keen eye on him throughout the 2015 calendar year, with Pearce even scoring for Fulham U18s against Arsenal U18s at the end of the 2014-2015 season.

Pearce officially signed for Fulham in November 2015 on a three-year contract after Fulham and Rovers had agreed a compensation package, and across his two seasons as an U18 at Fulham, the winger scored 10 goals in 37 appearances for the young Cottagers.

In 2017-2018, Pearce got his first taste of first-team football by joining National League South side Bath City in November, and made four appearances during his one-month loan.

In the summer of 2018, Pearce was released by Fulham at the end of his contract having made 10 appearances for their U23s during the season.

In June 2018, Pearce signed for EFL League Two side Forest Green Rovers on a one-year contract after a successful trial at the end of the 17-18 season.

At the end of the 2018-2019 season, Pearce was released by FGR having made eight appearances and scoring two goals, while being an unused substitute 14 times.