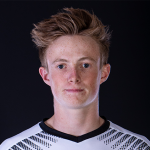 RYAN JONES (IN ON LOAN)

Jones came through the North Somerset Academy and at the age of 16, joined Clevedon Town U18s where he scored seven goals in 10 appearances during 2018-2019 and helping the side to the Somerset Floodlit Youth League Premier Division title, as well as being a part of Clevedon’s memorable FA Youth Cup run which saw them knocked out against Manchester City.

The winger began to get his first taste of senior experience with Somerset County League Division Three side Hutton during the 2018-2019 season, scoring three goals in five games while being an unused substitute once.

Before the end of the season, Jones made his senior debut with Clevedon Town, appearing nine times and scoring twice for the Western League Premier side as well as being an unused substitute five times and being named MOTM twice.

After impressing for the Seagulls during the 2019 pre-season schedule, Jones signed first team forms for the 2019-2020 season under new manager Scott Bartlett.

Following an impressive breakthrough season during 2019-2020, the teenage winger penned his first Seagulls contract for the 2020-2021 season.

His good form at the start of the season saw him make a domestic Transfer Deadline Day move to League One side Bristol Rovers, immediately returning to Weston on loan for the rest of the campaign.