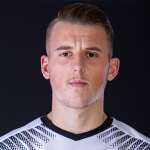 Sam started out in the Bristol Rovers academy after joining during the U7 phase, where he spent ten seasons, before heading north to Forest Green Rovers and linking up with their U18 side in the summer of 2017.

During the 2017-2018 season, Hendy was an unused substitute three times under Mark Cooper.

In January 2019, Hendy went out on a ‘work experience’ loan to Hellenic League Premier Division side Longlevens until the end of the season, where he made six appearances and scored one goal.

During his second season as a scholar at FGR, Hendy was named the Academy Players’ Player for 2018-2019 before completing his scholarship and linking up with the Seagulls.