Tomorrow, Weston travel to newly promoted side Hayes & Yeading, with both sides in search of their first three points of the campaign.
The Seagulls have drawn their opening two league games of the season, having scored equalisers deep into added time in both encounters. Defender and player-assistant manager Scott Laird netted his first goal in Weston colours with a late penalty against Merthyr Town on Tuesday night.

Hayes have started the season with one point from their opening two games, having come back to draw 2-2 with Tiverton Town on the opening day before a 2-3 loss followed at home against Harrow Borough on the Tuesday. Central midfielder Matt Hall is suspended for tomorrow’s clash after recieving two bookings against Tiverton.
The game kicks off tomorrow at 15:00 at the SKYex Community Stadium. Ticket prices for the game are as follows: £10 Adults, £6 Senior Citizens (60+), £6 Students (16-22 with student ID), £3 U16s and U5s go free. 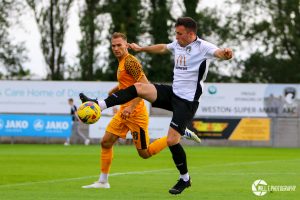