Weston-super-Mare AFC are pleased to announce the signing of both Aaron Parsons and George Dowling on a one-month loan from Bristol City, with both players available for Saturday’s trip to Oxford City.

Parsons, now 20 years of age, made the progression from an U18 scholar to the City U23s by signing a professional contract in the summer of 2017. The centre-back first joined the Seagulls on loan in January 2018 and made 16 appearances and scored one goal during his first loan spell. Parsons rejoined for a second loan spell in August and made two appearances but his loan was cut short due to injury.

George Dowling is a central midfielder who is capable of winning the ball in midfield and driving forward with it, his vision one of the 20 year-old’s main attributes. Dowling made his Bristol City first-team debut on the 30th April 2016, appearing as a substitute in a 4 – 0 win over Huddersfield Town. In August 2016, Dowling joined the Seagulls on a two-month loan and made nine appearances in his short spell before returning to Ashton Gate. In August 2017, the midfielder joined Torquay United on loan and made 22 appearances in a season-long spell, despite injury holding the midfielder back. In July, Dowling joined Eastleigh United on loan until January 2019, and made a few appearances before Bristol City cut his loan short. 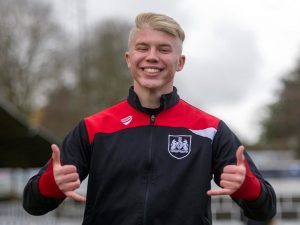 Head coach Marc McGregor said “We are pleased to add both Aaron and George, who both know the club well. They will come straight into the matchday squad for Saturday. Making these two signings means players will need to be at their best to stay in the side. We would like to thank both Brian Tinnion and Bristol City for their ongoing support”.

We would like to thank Bristol City for loaning us both Aaron and George and wish the players well during their time with us at the Woodspring.