Weston-super-Mare AFC are pleased to announce that striker Marlon Jackson and winger Jennison Myrie-Williams have signed for the season ahead of our trip to Welling United.

A one-season spell at Bury, and a four-game loan spell with Lincoln City, led to the striker heading to FC Halifax Town and Oxford City.

In 2015, Jackson joined Tranmere Rovers but only stayed up north for six months before rejoining Oxford City and scoring seven goals in eight games.

Jackson then spent two years with Newport County from 2016-2018, but was only used sparingly.

In September 2018, Jackson joined Hereford FC and scored one goal in six appearances for the club, a goal in an FA Cup second qualifying round replay against Truro City. 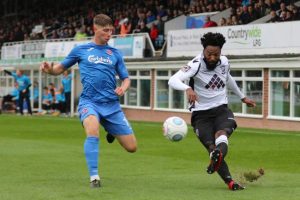 Winger Myrie-Williams made 36 appearances and scored two goals while coming through at Bristol City from 2005-2007, and spent time on loan with Cheltenham Town (twice), Tranmere Rovers, Carlisle United and Hereford United, making 69 appearances and scoring seven goals during those loan spells.

After his Bristol City release in 2009, the left-footed winger moved across the border to Scotland, playing 36 times and scoring two goals for two clubs; Dundee United and St Johnstone.

In 2011-12, Myrie-Williams made 19 appearances for Stevenage but failed to get on the scoresheet.

In July 2012, Myrie-Williams signed for Port Vale permanently after a brief loan spell in the previous campaign, and in total he scored 22 goals in 101 games for the Football League side.

In 2014-2015, Myrie-Williams was on the books of Scunthorpe United, making 20 appearances, and during the same season, was out on loan to Tranmere, playing 18 times and scoring three goals in League Two.

In 2015, he made eight appearances for Sligo Rovers in the top division of Irish football.

In 17-18, the speedy winger made 12 appearances for Torquay United, then in the National League, before joining Hereford FC later on in the season.

Before his release from Hereford in October 2018, Myrie-Williams had made 23 appearances and scored eight goals at Edgar Street. 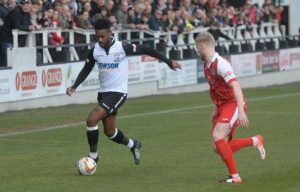 On the pair signing, head coach Marc McGregor commented “We as a management team have been tracking both Marlon and Jennison for some time.They are players that will fit into our style and just as importantly fit in with the group. Their experience can really help our young squad mature quicker throughout the rest of the season. I’m thankful to Oli and Paul for helping to get these two signings across the line, because it shows real intent. We are still hoping to improve in other areas as well”.

We are delighted to have both players at the Woodspring, and are looking forward to seeing the pair in action.