In this new series on the Seagulls website, we take the time out to interview various ‘unsung heroes’ around the club starting with friendly face Dave Thorne, who has helped out at the club for over 20 years. 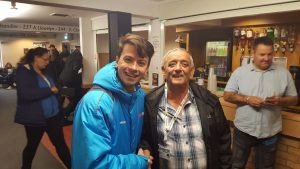 How would you describe your role with the club?
For the first six to eight years, I used to just come and watch and then for about the same period of time after that, I was doing first aid. After that, my mate left the club shop and I took it over. I’ve been here for about 20-odd years now at the club, ever since we were in the old ground.

How did you start volunteering at the club?
Down in the old ground, by Winterstoke Road on the roundabout, they were looking for a first aider and I had just happened to have passed my first aid course, so I decided to volunteer and here I still am, 20 years later, still helping the club out on match days.

What is the best part about your role?
The best part has been helping people if they got injured. I remember a little girl from Hornchurch broke her arm so I helped to fix that and took her down the hospital and while working in the club shop, it’s been meeting the people and having a laugh and a joke with them. I wouldn’t change this for anything right now!

How did you get attached to the club?
Going back to the 1990s, my next door neighbour, Richard Huxtable, used to come down and watch Weston. I happened to see him and ask where he was going, and he said “oh, I’m going down to watch Weston play”, which was only about 500 yards from my house. So, I decided to go with him and I’ve been here ever since! It’s been incredible seeing the club grow!

What’s been your favourite moment as a Weston volunteer?
Watching them get through to the first round proper of the FA Cup in 2014, against Doncaster Rovers. Although we lost, it was a good match.

Would you recommend other people getting involved with the club?
Yes, yes, because of the number of people you get to meet, and it’s always a good laugh on a match day. It’s always a lot of fun no matter what the weather is, and I enjoy every single home game getting to talk to people!

Everyone at Weston-super-Mare AFC would like to thank Dave for this continued service and devotion to the club.