This Saturday, Weston welcome Eastbourne Borough for the Seagulls’ “Community pay what you want day”, where all non-season ticket holders get entry to the game for a minimum £1 donation. 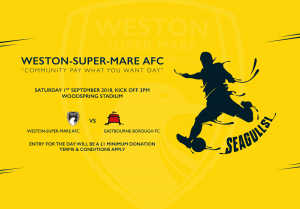 The Seagulls haven’t had the start they would have wished for this season, only two points from their opening seven games, their last result coming in a 2 – 0 loss away to local rivals Bath City. Marc McGregor will be hoping that, for the second game in a row, that playmaker Jarrad Welch is fit to play after suffering a knock, which led to his withdrawal, in Monday’s loss.

Eastbourne, however, have started the season in surprisingly fine form, sitting sixth after the opening month of the campaign with 12 points. Three draws (0 – 0 against Oxford City, 2 – 2 against Truro and 1 – 1 against St Albans) helped to give Eastbourne a positive place in the table early on, with three wins (1 – 0 against Welling, 0 – 1 against East Thurrock United and 2 – 1 against Chippenham Town) have helped to mark out the Sports as early dark horses for the playoff places.

Last time the Sports visited the Woodspring, the Seagulls triumphed 5 – 1 on a wet November afternoon last season. Danny Greenslade nodded in early on, before Gavin McCallum equalised just a moments before half-time. After the break, Gethyn Hill tapped in froma few yards out, before Dayle Grubb scored two in two minutes to give the Seagulls breathing space. Hill slid in at the back post late on to seal the win.