Hi Scott. August has been an interesting month. You’ve gone unbeaten in the league, winning three and drawing three. What’s your assessment of the month?
I think it’s been good. We’re saying the same things really but we’re a new group, it’s important to start as well as we possibly can. Obviously we had a brilliant introduction to the season with the game against Taunton which answered a few questions for me and Lairdy about the squad and the mentality of the group. We’ve really enjoyed it, I don’t think we’ve quite been at our best at times but we’ve managed to grind out a couple of results when things weren’t going our way so we’re looking forward to taking our form into the next month. The boys had a points target and also a target to get to the next round of the FA Cup, so that’s the most important thing now.

You speak about the mentality of the squad, and in the past month you’ve had to face different situations. You’ve scored last minute equalisers, you’ve been down to ten men, you’ve had to hold onto leads. Can your squad do a bit of everything in terms of that attitude and mentality?
Yeah, we’ll get better with the ball once the team settles down a bit. We’ve had two or three changes most games, sometimes to freshen it up, sometimes through form or it’s normally because we’ve looked at the opposition and the ways that we can hurt them. I think out of possession, we’ve been outstanding. The numbers we’re hitting in terms of our running stats and application have been very impressive, which has probably gained us four points out of the 12 we’ve got already I would say. The win at Hayes & Yeading was more effort, backs to the wall defending at times. The point away at Merthyr, which I thought was a good point at the time, has turned out to be because I think they’ve won all their other home games. If we can keep doing that and allow our younger players to get used to the level, then we can achieve something.

You speak about the younger players. How do you feel the likes of Sam Hendy, Dan Martin, Connor Davies and Niall Maher etc have all done so far?
We’re really young, aren’t we?! You can put Aaron Parsons into that, Ryan Jones, Tom Llewellyn, Jarrad Welch, Jay Malshanskyj, Joel Randall. That’s almost a youth team or under 19 team at times. I think they’ve been fantastic, some of them haven’t played as much as they might like but their attitudes have been absolutely spot on and we know that we can trust them and call on them when we need them. A big part of their development is being helped by Lairdy, Alex Byrne, who’s a really calm character, Luke Purnell, Greg Tindle, Nick McCootie, Ben Whitehead, there are some good characters there for those younger boys to learn from. I think they’ve done well, I think that we have to get that blend right. I think at the end of the Poole game, we might have had seven teenagers on the pitch at the same time and after the Truro game, we were very, very young. They’re having to grow up very quickly and we’re proud of where they are, but if we can bring in one more experienced player, or at least have all of our experienced players on the pitch at the same time, that will help us. Jake Mawford’s back now, Owen will be back very soon, Lairdy will be back in two games time. Once we add those two or three players to the group, we’ll be even stronger. 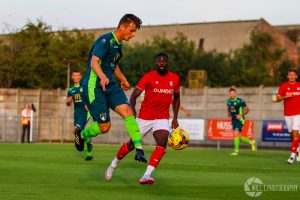 Dan Martin’s done well also since coming on loan from Cardiff. How do you think he’s done so far?
Dan’s a good player. His one v one defending’s been very good, he was a big factor in us earning a point against Poole with ten players because he was so good in one v one situations. All the players that have come in on loan and all the new signings have gelled really quickly together, I don’t feel like they’re loan players. We’ve got them on a decent contract, six months or the full season so we see them very much as Weston-super-Mare players. To be fair to them,  they’ve bought into what we’re trying to do and they’ve been great.

Over the past month, you’ve had your fair share of struggles with injuries too. Luke Purnell, Ben Whitehead, Charlie Madden to name a few. Scott Laird’s also been suspended. Has it been hard for you to put a team out with some key players missing?
Yeah, you’ve got to try and get the balance right. Injuries and suspensions are part and parcel of football, I’d like to think that we’ve had our fair share early on and for us to have 12 points from six games is pleasing, especially for the age of the group that’s played. I don’t think we’ve had our experienced players on the pitch at the same time and that may be how it works out over the course of the season. It’s genuinely difficult to pick a team and a squad because everyone deserves to be in it at the moment. We’re spending a lot of time talking about the opposition and ways that we can hurt them. Sometimes, we’ll play Isaac in the middle of the pitch because we feel he can get out through the middle, sometimes we’ll isolate him in the middle against a full-back that we’ve identified Isaac can get some joy from. It’s horses for courses and what we’ve done well as a club is we’ve brought in players who can play in various positions. You look at the number of positions Joel Randall’s played already, he played up front on Saturday, he’s played wing-back, wide left, wide right, central midfield already. It’s something for his education but it’s also testament to the grounding he’s had at Exeter because he’s been able to perform to a high standard in each of them positions because it’s not easy to do. 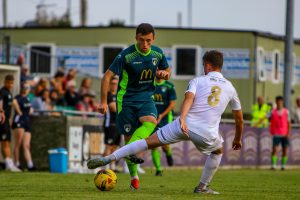 Owen Howe’s back in the next couple of weeks. Are you looking forward to getting him back out on the pitch?
Owen’s worked really hard behind the scenes, and he’ll continue to do that. We need to get him as fit as we can, so that he can hit the ground running. He’s had his problems that have been well documented, but he’s a good character, we like having him about the place, he’s brilliant with the younger players and I’m fed up of seeing him on a Saturday not able to play. We look forward to having him play, he brings a different dimension to our attacking play which means we can use Nick McCootie in different ways. Owen’s a handful, he’s a goalscorer. It’s going to take him a little bit of time to get going properly but he’ll be like a new signing.

Over the next few weeks, you’ve got Walton Casuals, Salisbury and Wimborne. What are your thoughts ahead of those games?
Every game in this league’s tough but every game has to be winnable for us. We said to the boys on Saturday that it’s not neccesarily an isolated game against Beaconsfield but that type of game, if we want to do something this year, is one that we have to win. We have to win the majority of those types of games. We found a way to do it, a little bit fortuitously because I think they deserved something from the game, but that’s the way it goes sometimes. I think we fully deserved to beat Hendon on the first day with the way we played after the first 20 minutes, and things even themselves up and we’re looking forward to them types of games. We’ve got three different challenges in them games, you’ve got the big club in Salisbury who have a decent following, obviously my old club who I played 400 games for so that’ll be a nice one for me, Walton Casuals is going to be a tough away game on a 3G so we’ll have to have a tough mentality for that and Wimborne’s the last one so the first two determine the confidence in the squad going into that one. 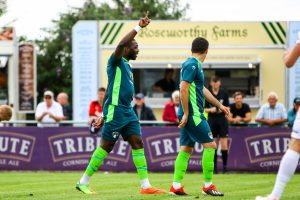 You’ve also got Fareham in the FA Cup. What are your thoughts ahead of that one?
I went to watch them in Hampshire on Friday evening against Whitchurch in the FA Vase and they had a good following, I think they’ll bring a few. It’s a huge game for them, it needs to be a huge one for us otherwise it could be a potential banana skin for us. We said it right from the first minute I stepped through that door, the expectation is for us to win games now so teams will come here and be delighted with a point, Fareham will come here and be delighted with a replay. We need to make sure that we have enough in our locker to undo them and having seen them, they’ve got some threats. The front two are lively, right wing-back’s got good energy, centre halves are all aggressive but that’s what we come up against every week in our league so we just have to make sure that we’re good enough on the day to get through to the next round.