Weston-super-Mare A.F.C are delighted to announce the signing of Ben Swallow on a year-long deal.

Swallow began his career at Cardiff City where he was released as a youth player, before signing a professional contract at Bristol Rovers when he was 18. From there he had loan spells with Taunton Town, Bridgwater Town, Chippenham Town and Mangotsfield United. In 2012 the wide-man’s contract was cancelled by mutual consent, having scored two goals in 49 appearances for the Pirates.

He then went on to sign for Newport County, playing 23 times and scoring two goals en route to the Conference Premier Play Offs, which they eventually faltered in and he was released at the end of the season. He’s since had spells at Bromley, Havant & Waterlooville, Margate and most recently Bognor Regis during the 2017-18 campaign in which they were relegated. 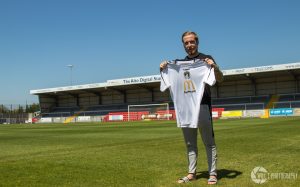 Ben is an out-and-out winger, his hold up play and crossing ability has been lauded recently by former Margate manager Nikki Bull. He has a superb engine and likes to bomb down the wing, utilising his lightening-quick speed and wicked left foot to create chances for himself and his teammates.

Ben is a great addition to the squad. He has loads of experience from his days with Football League and National Premier clubs so his signing represents our drive for quality players

Swallow joins a host of attacking talent at the Seagulls. To see them in action throughout the year, buy a season ticket here.