Symons is a big target man with a never-say-die attitude.

‘Big Symo’ is a good player and a cracking character, we are delighted to have him.

“As with Chris Knowles, It was important to me that this was another permanent signing as it gives us stability as we continue to build.

“Mike is a big powerful, experienced frontman who is a threat in the air and from set plays, strong with his back to goal and effective at bringing others into play. He will compliment our attacking players very well and give us another dimension.

“He has proved very popular with the Hereford fans over the years and rightly so, I am sure he will be as popular here.”

Symons started his career with Barnstaple Town in the Western League Premier Division, progressing up through the youth ranks and into their first team in 2002.

In the summer of 2003, he joined League One side Bristol City but failed to make an appearance for their first team as he was a regular in their reserve side, as he was released in 2004.

In January 2006, he made the step up to Southern League Premier Division side Cirencester Town, before being released by the club in March 2007. 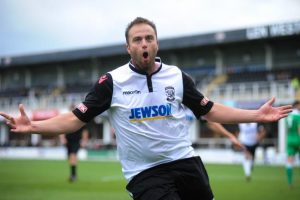 Just four days after his Cirencester release, he joined Southern League Premier Division side Clevedon Town and remained as a regular for the Seagulls’ rivals, leading their line consistently.

In July 2008, Symons joined National League side Forest Green Rovers on non-contract terms and dual registered with Southern League Premier Division side Gloucester City at the same time. He netted six goals in less than two months for the Tigers, before signing a full-time contract at Forest Green in September 2008, scoring three goals in 25 appearances.

Following his release from Forest Green, Symons signed for National League North side Gloucester on a permanent basis in July 2009, and he went on to score 16 goals in 79 appearances before his Tigers release in May 2011.

In June 2011, he signed for National League North side Worcester City, where he spent two seasons.

In May 2014, he joined National League North side Worcester City, where he spent the next year of his career before being released.

In May 2015, he joined National League North side Gloucester City before being released in October 2015.

During November 2018, Symons also spent time with Southern League Premier Division side Swindon Supermarine on dual registration for a couple of weeks.

We would like to welcome Mike to the club, and wish him all the best during his time with the Seagulls.