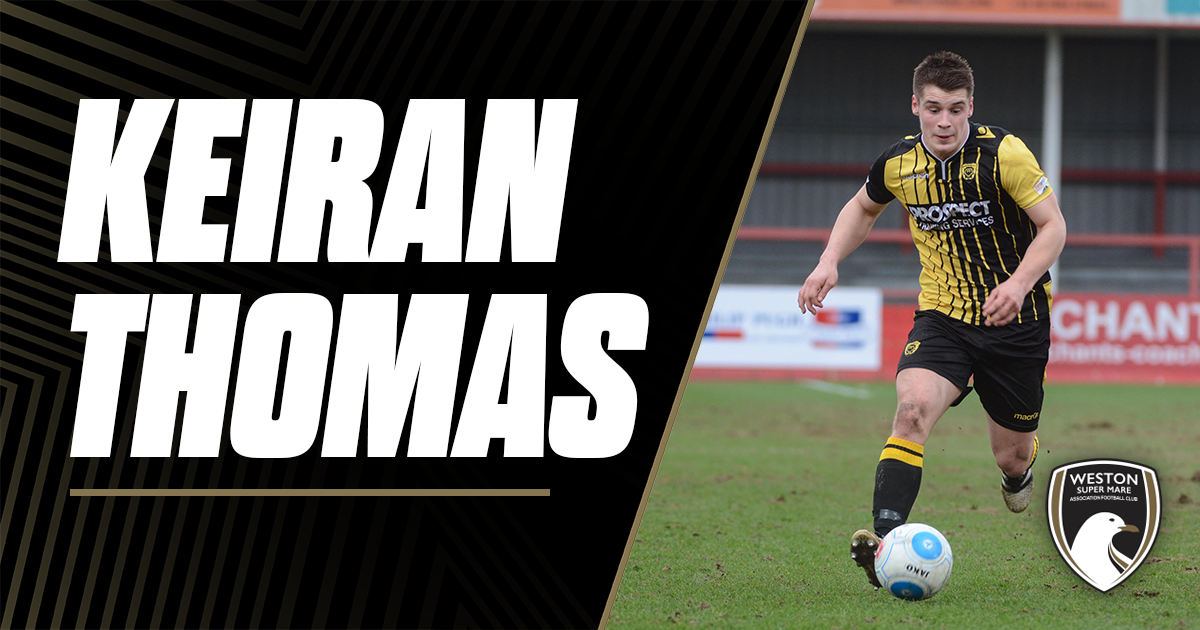 Despite a lot of competition, Bartlett has landed the signing of the highly-rated 25-year-old, who has signed a long-term contract with the club.

This is a brilliant signing.

“Keiran is an aggressive and powerful player and is one of the best around. He can play anywhere down the right-hand side of the pitch and also has the quality to play in midfield.

“He’s at a good age to continue his development but comes to us with hundreds of games under his belt in the leagues above.

“He has thought hard about making his next step which I think is important.

“He is a wholehearted player that enjoyed his time at Gloucester and Hereford. Obviously he knows a lot of the squad from his time at previous clubs and people like Brad (Ash) and Jacob (Cane) have spoken highly of the club which is testament to us all.

“It’s important to address the current situation and we are being cautious with our planning but when a player of Keiran’s quality and attitude becomes available you have to act quickly.

“I’d like to thank the board and sponsors obviously but also the supporters and everyone that were kind enough to donate to the JustGiving page. Because of that support, we have been able to improve things around the club and also add to the playing squad, thank you.

“We are delighted he has agreed to join us and I’d like to wish him every success as a Seagull.”

I am happy to sign for Weston and looking forward to the new challenge.

“I have spoken to some of the boys that are there and the gaffer a lot over the last few weeks and am impressed with the club’s ambition as well as the club’s facilities.

“I had a brilliant time at Hereford and had a good rapport with the fans, and I can’t wait to get started.”

The defender began his career with one of his local youth sides, Mitcheldean, before being snapped up by Cheltenham Town at the age of 11, and he started his career as a central midfielder, earning the nickname of ‘Pitbull’ because of his combative tackling style. He began a two-year scholarship with the Robins in 2011 and found himself being turned into a right-back at the age of 17.

Thomas was loaned to Southern League Division One South & West side Cinderford Town in February 2013, and he made 24 appearances during his stint at The Causeway, scoring one goal and assisting two.

The full-back then left Cheltenham in the summer of 2013 after failing to secure a professional contract with the club.

He returned to Southern League Division One South & West side Cinderford that same summer, and became a regular as he played a vital part in the club’s history. He was appointed captain of the club for the 2015/2016 season and went on to lead the Foresters to the league title, their highest-ever league finish in their history at that point.

His form for Cinderford attracted the attentions of National League North club Gloucester City, and he linked up with the Tigers in May 2016. He established himself as one of the best right-backs in the division, and his first season at the level culminated in a trial with Derby County during April 2017.

While the trial with the Championship club was unsuccessful, he continued to take his game to new heights upon returning to Gloucester, being appointed captain for the 2017/2018 season and playing a large part in their season.

He brought his two year spell with the Tigers to an end in June 2018, signing for fellow National League North club Hereford FC. He was one of the standout players for the Bulls, as his whole-hearted approach made him a fan’s favourite at Edgar Street. He came second in the Supporters Player of the Year vote in 2018/2019 before scooping the award a year later in 2020.

Branding your name or business alongside the player of your choice will give you or your business an impressive profile throughout the entire season in every edition of the matchday programme and player profiles on our innovative website.

We are delighted that Keiran has signed for the club and we wish him all the best during his time at The Optima Stadium.