Dan Hartley and James Hodgkinson took the helm as joint managers before the start of the season and their reign started off sourly with a defeat to the tune of 2-1 by Taunton Town in the FA Youth Cup Qualifying Round. They recorded their first win in the other cup competition, the Roger Stone Memorial Cup, with an impressive performance against Wells City, in which Sol Wanjau-Smith popped up with 2 goals and Glen Hayer scoring one of the goals of the season with a free-kick from halfway.

The SFYL League campaign began and the ‘Young Seagulls’ got off to a good start after dismantling Wells City 3-1, again with goals coming from Glen Hayer, as well as from Ash Tandy and substitute Ryan Eardley. The team then took a dreaded trip to table-toppers Yate Town, where the side were unable to keep up with former player Kailan Gould and Bristol City trialist Lewis Powell as Yate ran away 8-0 winners to bring the side back down to Earth. The side then came back to The Woodspring Stadium and took on Ashton & Backwell United, where they unfortunately lost 4-2 despite Glen Hayer scoring a brace in the game. The month was also significant for the re-signing of Pat Riddell from Clevedon Town, with Nathaniel Groom and Ollie Coombes also linking up with the side.

With no action coming in November, the U18s had to wait until December before they could take to the field to play Odd Down in the Roger Stone Memorial Cup Last 16, with the side losing 3-2 in a match played in terrible weather conditions. Adrian Hodgkinson finding himself on the wrong side of the linesman decisions with 2 goals disallowed as offside. A few days after Christmas, the U18s played a friendly against Jake Mawford’s Somerset Schools U16 side, the side were unlucky to fall down and lose 2-1 as a result of a penalty being won by Somerset Schools late on in the game. The match marked a debut for Reece Ferguson from the U15s, who impressed with his passing and skill from the left wing.

The team travelled to rivals Ashton & Backwell Utd to face off and avenge their defeat in October as their first game of 2016. The U18s won 2-1, with debuting Pat Riddell scored along with Lewis McLean volleying in to the back of the net to claim his first U18s goal.

The side geared up for the end of the month, with a trip to Wells. Here, a win 2-1 courtesy of goals being netted by Sol Wanjau-Smith and Glen Hayer (again!). Only 2 days later, the team were on their travel again, this time to Clevedon, with this came a disappointing loss as the lads conceded twice within the first five minutes to give Clevedon a 2-0 win, despite the team dominating the whole game.

As Spring came to the country, the side took on Chard Town on their sloping pitch, with Dan Rosser coming to life in the game by bagging 2 goals, but as Chard fought back to look like they were in danger of snatching a goal, a classic Ash Tandy run up the pitch saw the U18’s clinch the win.

With April came an array of disappointment within the squad. Managers Dan Hartley and James Hodgkinson had left to focus on their U12s team, leaving the side in the more than capable hands of Syd Camper and Will Sneddon-Coombes. Syd and Snedds began their interim reign by facing up against Yate Town at home, with the ‘Young Seagulls’ falling to a narrow 1-0 loss, in which Weston arguably deserved to win. The next game for the side was against Clevedon Town at home, with the side clinging on in the 1st period but completely capitulating in the 2nd half and losing 3-0.

With home games vs Chard and Taunton being cancelled due to pitch work, an away game at Taunton served up to be an emotional affair with many players facing up to the fact they were playing their last ever game in a Weston AFC shirt. With inspired performances from each and every one of them, the team served up a perfect final game despite the result as they ended 1-1 with Taunton, with Dan Rosser scoring the goal and Charlie Bridges getting sent off for an early bath.

Player Of The Season: Matt Trybull

Having captained the side on a few occasions this season and been very safe in the way he plays, Matt shows commitment in the tackle and is a real leader. He deserved his first-team debut and hopefully he can now push on to greater things.

Played as a target man this season and despite not being the tallest of players, Sol is good with the ball on his head or at his feet. Hopefully he is able to polish his finishing next season.

Been a commanding figure at centre-back and has popped up with goals along the way, claiming himself as the U18s top scorer for Weston this season. Hopefully Ryan Northmore can spot his potential during pre-season.

When Dan Hartley and James Hodgkinson made the bold decision to move the youngster to centre-back from right-back at the start of 2016, he reacted and came on in leaps and bounds with his defensive capabilities.

Sol had a flying start to his Weston career. Despite sometimes lacking in his finishing, he has been a superb link between the midfield and attack, which has seen him show promise over the past season.

Ash has been an asset to the team, and although he now finds himself too old to be eligible for the U18s, he hit the ground running and now finds himself moving up and on the first team fringes after a superb season.

The Winger had a good season, using his pace and strength to get down the wings quickly. Despite leaving now, Ryan has shown he is extremely capable of forging a footballing career for himself.

Goal of The Season

1st Place: Glen Hayer vs Wells City: Launches a free-kick from the halfway line, beyond the backpeddling keeper and into the net.

2nd Place: Ash Tandy vs Chard Town: Brings a Harry Ratcliffe ball down on his foot, before sprinting past the last man from halfway and calmly slots into the corner.

3rd Place: Dan Rosser vs Taunton Town: Controls a Matt Trybull pass with the outside of his foot, before flicking the ball up over the defender’s head 3 times and volleying into the corner.

MVP Man Of The Match (Most MOTM’s)

Matt Trybull: Achieved four separate MOTM awards this season with some inspiring and commanding performances from the centre of the park. His long-range passing has been immense to watch this season and his set-piece delivery is one to watch.

1st Place: Harry Clemetson- “We started at a slow pace but got into the game pretty quickly”. In an interview after the Backwell game, Harry used this quote to sum up the game with both his points meaning exactly different things, which then sparked the U18s to take the mick out of Harry on social media.

2nd Place: Jay Webber Andrews- “We scored a goal?”. When I asked him on who scored his favorite Goal Of The Season, Jay responded, nodding to the fact that perhaps the team had had a poor season and struggled to score goals.

3rd Place: Ash Tandy- “We’re gonna win the league”. In the interview after the Backwell game, Tandy put pressure on the side by calling that the side were going to win the league. This insistence stuck right through the season from the 18 year-old.

When receiving the ball with his back to goal against Clevedon at home, Sol had no options but surprised everyone with a ‘McGeady spin’ around the defender but unfortunately didn’t end up finding the back of the net.

2nd Place: Glen Hayer vs Clevedon away: The ball playing defender pulled off a neat Cruyff turn to get away from the opposing attacker and pass the ball off.

3rd Place: Ryan Eardley vs Clevedon home: Ryan pulled off his own rendition of the ‘Grubby shuffle’ to bamboozle his man but was then taken down as he looked to break away winning a free kick.

Spirit Of The Team: Everyone

Everyone was smiling and laughing throughout the season despite struggling and losing games. They picked themselves up after every game and consistently put 110% into the each game. The sign of a great team! 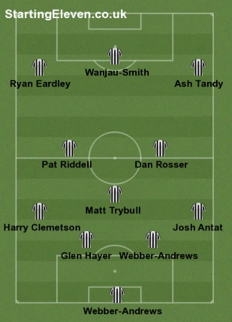