This Saturday marks Non-League Day across the country, and the Seagulls welcome 20th-placed East Thurrock United to the Woodspring Stadium.

Weston are still without a win in the league this season in the league, but following their scrappy win over Coggeshall Town in the FA Cup, it proves that Marc McGregor’s side don’t have to be the better team on the day to nick a result. Eli Phipps will be pushing for a start after scoring with his first touch to send Weston through, whereas winger Tristan Plummer will serve a one-match suspension following his sending off last weekend. Brad Ash is available for the Seagulls again after being cup-tied last Saturday.

East Thurrock come into this clash sat in 20th place, having lost their last five in all competitions. The Rocks have recently added to their squad throughout the week, signing centre back Steve Sheehan, central midfielder Reece Prestege, left back Jonathan Nzengo and Turkish forward Gokan Can.

Last time the sides met was back in February, again at the Woodspring. Sam Higgins put the visitors ahead with a header, before Montel Agyemang equalised with a fierce strike from outside the area. Gethyn Hill quickly replied by flicking in a Danny Greenslade cross, and central midfielder Kristian Scott equalised minutes before half-time when he slid in a deflected Greenslade cross. The full time result was 2 – 2. 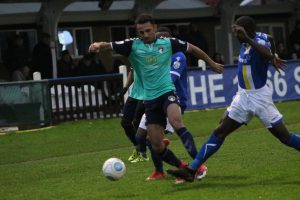