Weston-super-Mare A.F.C are proud to be celebrating a phenomenal achievement by our women’s team, who beat Torquay United Ladies 1 – 2 in the first round of F.A Cup qualifying at their home ground of Plainmoor Stadium.

The home side are a division above the Seagulls, however that seem didn’t seem the case as Weston dominated the ball for long periods of the game, often keeping Torquay penned in their own half. Ellie Roberts scored two first half goals however the Gulls did pull one back in the second half, despite initial confusion amongst the officials. 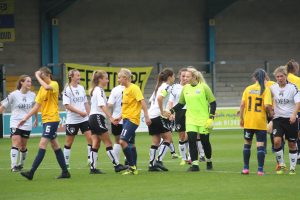 This feat is even more impressive when you find out that this was the ladies’ first competitive game this season, after a long season of cancelled friendlies and squad overhaul so to progress to the next round is something the whole club can be extremely proud of.

About the game, Women manager Stacie Morrissey commented: “I am delighted to be managing this team especially in such a big cup. The women have achieved so much already, conquering a side in a much higher league; this success has come from hard work, persistence, a willingness to learn and pure courage. Each player has developed so much already and it really inspires me to work harder for them as it’s clear the talent and passion this group will take them far. For me, I guess success comes from belief and I believe in all of my players. We will give the FA Cup 110% and I will be proud regardless of the result, but I know there’s still a lot more to see from my women”.

Weston’s next game in this competition is Larkhall Athletic away on 23rd September with a 2pm kick off. Larkhall are multiple divisions above the Seagulls so this will be the ladies’ biggest challenge in 3 years of playing for Weston-super-Mare A.F.C.