Weston-super-Mare AFC Women are ready to reach new heights with a reshaped management team leading the Seagulls into a new campaign in the South West Women’s League.

After stepping up to the main role at the end of last season and successfully leading the women to Cup glory against League Champions Pen Mill, Stacie Morrissey takes permanent charge as Manager. Morrissey knows the team like nobody else after building the foundations back in 2016 and overseeing the management team ever since; she will be primed to keep the progression going now she’s at the helm.

Her assistants will be the experienced Josh Donoghue and Kaine Perks. 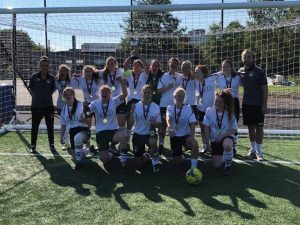 Donoghue takes a step down after managing the side for the last two seasons since it’s formation due to work commitments, but with the team’s success already since he’s been involved he is sure to be a perfect complement to Morrissey.

Perks was goalkeeper coach last season and will still fulfil these responsibilities however his time coaching Bristol Women’s academy as well as his wealth of expertise has earned him new roles for next season;he will also assist the team as well as overseeing player development programmes to drive the team further forward.

Morrissey expressed her confidence and enthusiasm for her new role.

I am delighted to be given the opportunity to manage the team. I have worked closely with the women and Josh the last two seasons and I feel with the players and coaches I have on board we can only continue to achieve great results

I am personally happy Josh and Kaine have chosen to assist me this season. It’ll be great to have them working with me this season and we have many exciting things lined up for the team.

Morrissey and Donoghue are also applying for their UEFA B licence as they look to give their players the best possible coaching over the course of the season.

It’s an exciting time to be a fan of the Weston-super-Mare A.F.C Women side who have already set the bar high, but with these tweaks to the setup they are in a great position to raise it even further.